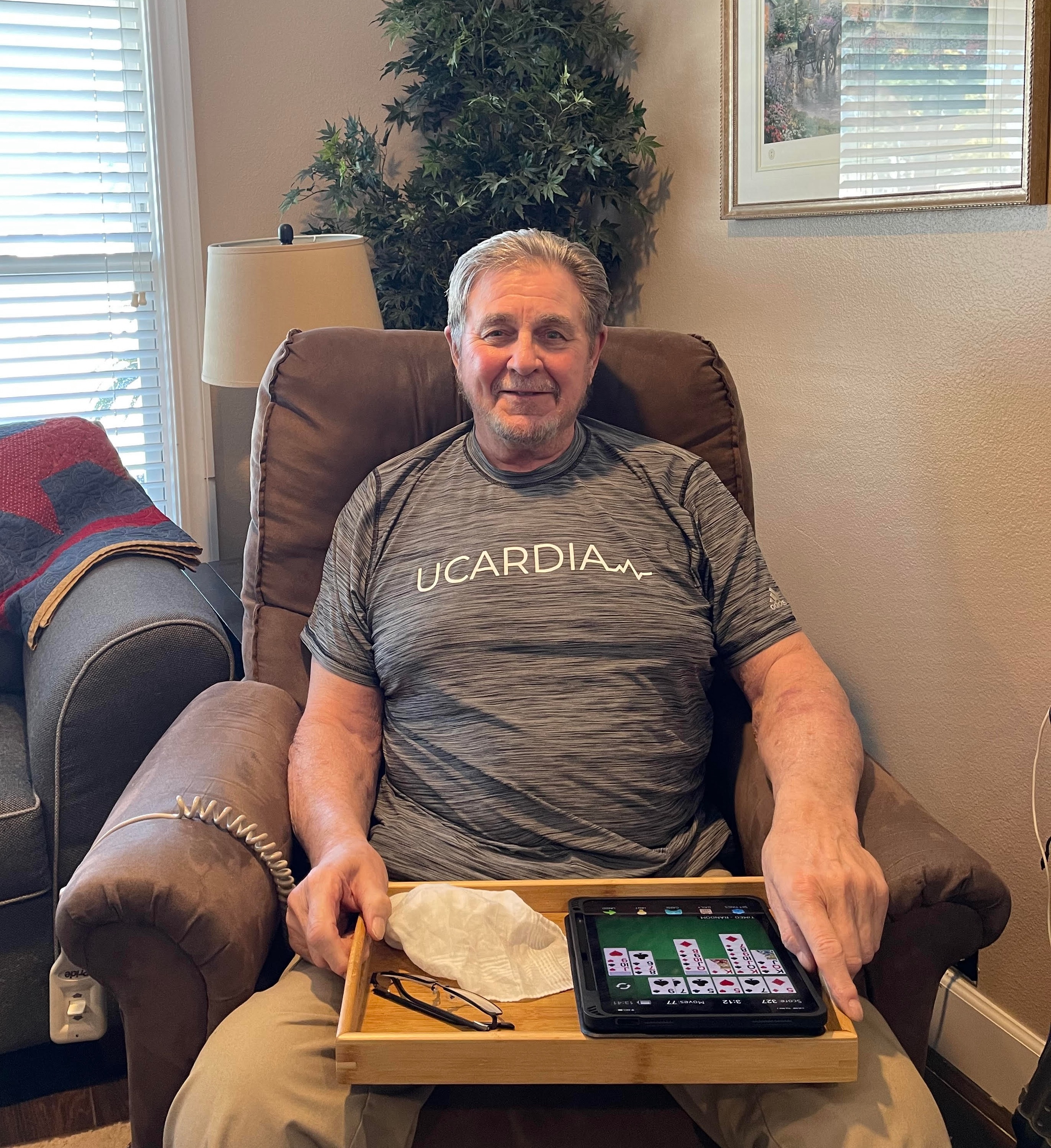 According to the American Heart Association (AHA), fewer than 20% of Americans who qualify for cardiac rehabilitation ever even participate in a rehab program. Those who do begin a program are often likely to quit before the final session. Yet thanks to Ucardia’s at-home cardiac rehab solution, this month Tom is excited to have completed all 36 recommended sessions. His program was conceptualized by Ucardia’s in-house Exercise Physiologist, Liz, EP, RN.

Tom, who is a retired accountant living with his daughter and son-in-law in Southern California, has also been living with polio since the age of 2. Recently he had learned that what doctors had previously thought a heart murmur was in reality a leaky valve.

After receiving the recommended aortic valve replacement—the initial treatment for his heart condition—Tom signed up for Ucardia to take charge of his long-term health.

Tom said in a follow-up interview after his 36th session that he appreciated never having to drive to a brick-and-mortar rehab facility. Ucardia allows users to sidestep the time-consuming logistical hassle of in-person appointments—one of the main reasons why eligible patients skip rehab sessions. By making rehab more convenient and accessible, the Ucardia team hopes that it will be easier than ever for folks like Tom to stay motivated and ultimately reach their heart health goals.

By making rehab more convenient and accessible, the Ucardia team hopes that it will be easier than ever for folks like Tom to stay motivated and ultimately reach their heart health goals.

Alongside heart-healthy nutrition tips and guided mindfulness sessions, Ucardia tailors workout programs to accommodate the unique needs of each patient-client, including those who are living with disabilities. Liz worked one-on-one with Tom to design his personalized program, focusing primarily on upper-body resistance exercises rather than full-body workouts. Even if he wasn’t feeling up to a longer workout, he still felt able to commit to each session: Liz emphasized the benefits of consistent exercise and avoiding an all-or-nothing mentality.

Best of all, while completing his Ucardia exercises, Tom was able to spend time in one of his favorite places: by his backyard pool. Liz was “always willing to listen,” Tom said; she had a flexible approach that included activities he could enjoy while raising his heart rate. When he mentioned wanting to use his pool chair for resistance exercises or simply take walks around his pool, for example, she encouraged him.

For Tom, swimming is an important lifelong hobby; he swam avidly before his heart condition. As a child in northern Indiana, it was an outlet he could turn to while growing up with polio. He began swimming regularly at the YMCA with his father after his iron lung treatments stopped. Although he could walk with his brace, he “could never ride a bike or run,” he said, so swimming was an alternative that gave him both exercise and a sense of freedom.

As a young man, Tom jumped at the opportunity to escape the cold in Indiana by moving to California. It was always a joy to spend time outside in the California sunshine with his growing family—and in recent years, their pool has been a focal point for his children and grandchildren to gather. While working with Liz, one of his long-term goals was to get strong enough to swim again like he used to.

Now that he’s finished his Ucardia rehab program, he’s gearing up to get back into the water.